My first proper date with Tom was also the first (and only) time I have ever had a pig’s tongue inside my mouth.

I’ll explain how that happened in a moment but first, let me say that it was a very Appalachian first date, involving interesting characters, layers of history, craftsmanship, and livestock (of course) – interwoven in a uniquely contemporary way.

It took place along the banks of the French Broad, one of the oldest rivers in the world, 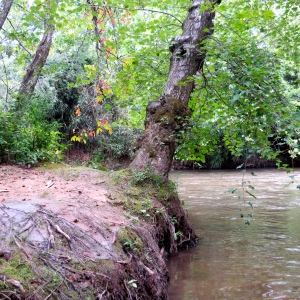 under the watchful eye of a dinosaur.

Where it flows through Asheville, the French Broad has for decades been lined with a motley assortment of old warehouses and industrial buildings held together by not much more than lush green ivy and many layers of graffiti and spray paint.

Back in the day, this stretch along the river was the epicenter of produce and livestock distribution for the surrounding Appalachian farms.

Over the years, however, 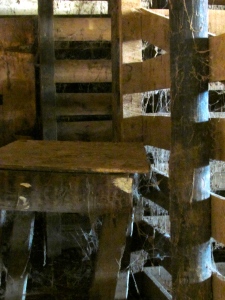 with the retreat of the farmlands and the changing ways of handling livestock, the buildings were gradually abandoned and fell into disrepair.

And then, decades later, something magical began to happen.

Slowly and quietly, first just a few, then hundreds of creative souls moved into nooks and crannies of the old industrial buildings that were even somewhat inhabitable, creating a much treasured warren of artist’s studios along the river.

And pretty soon, art was cropping up just about everywhere. 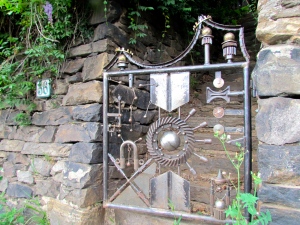 One of those creative beings was John Payne, kinetic sculptor, self-professed time traveler, and founder of the Wedge Studios. 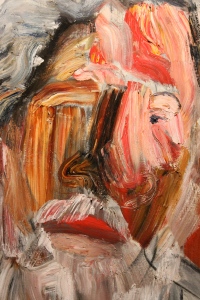 In 2001, Payne purchased a three story classic warehouse adjacent to the railroad tracks, which he transformed into affordable studio space for himself and other artists.

Known as the Wedge for its shape, the building originally functioned as a produce and livestock cooperative for Appalachian farmers back in the early 1900s.

A few years after Payne moved into the building, the Wedge Brewing Company, a craft brewery, opened up on the back loading dock, overlooking the train tracks.

Gradually, the area that had once been home to chicken hatcheries, tanneries, livestock yards, an ice house, and a flour mill, 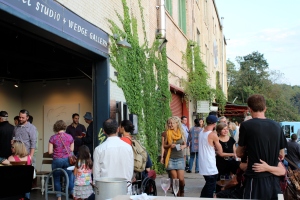 became a home for breweries, eateries, and artists – and is now known as the River Arts District.

down at the Wedge.

It was, therefore, a logical starting place for our first real date.

one of his fantastical creations, the Utahraptor, was purchased by the current owners of the Wedge Studios. It now stands guard above the entrance to his old studio on the building’s backside – 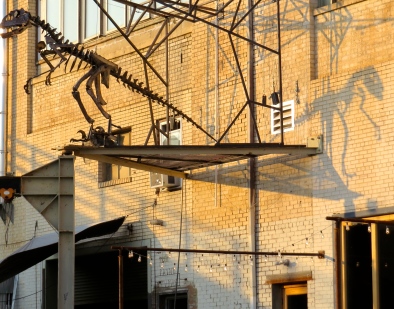 next to what has recently become The Bull and Beggar, a restaurant that Modern Farmer – a magazine and website “for anyone who cares about where their food comes from” – declared to be among their top ten global (yes, global) picks.

Drinks turned into dinner when Tom and I wandered hand in hand down the loading dock to check out The Bull and Beggar’s “sipid food and sturdy drink” inside their recently renovated portion of the warehouse. 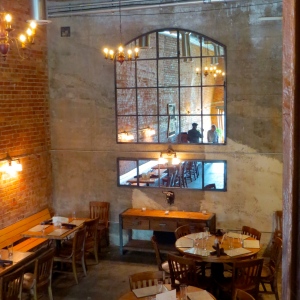 Accepting someone else’s idea for who to date had so far worked out quite nicely for me.

So when the women seated at the table next to us (as well as the waitress) raved about the pig’s tongue on the menu that night – despite the voice inside my head screaming – No!!! – I said okay, I’ll try it.

Years of trying not to bite the tongue in my mouth, however, was too much experience to try to overcome in just one evening.

Tom just laughed as he ate the rest of the porcine dish, all by himself.

And then, asked me out for another date.