For several weeks now, I have been on the lookout for moments to photograph that (at least to me) show the customs, culture and spirit of “Christmas in Appalachia.”

But so far, all I’d been able to find…

was Santa and Mrs Claus breakfasting at the Moose Café (a popular farm to table restaurant),

an aging elf trying to transport wrapping paper on his bicycle, 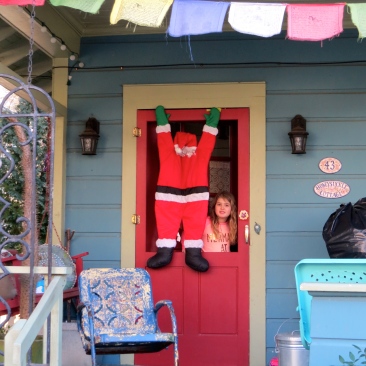 and a young mermaid surprising Santa – none of which were what I had in mind.

The days passed and suddenly Christmas was upon us. Tom and I drove up to his parents’ farm for dinner.

They live in a picturesque holler, a small valley that lies between mountains in Yancey County.  This wasn’t my first visit here, but I had never before seen it at dusk.

Their home, with the windows glowing and smoke coming out of the chimney, set against a backdrop of mountains, looked like a scene from a Norman Rockwell painting.

Tom is a fifth generation Appalachian and this entire valley was once owned by his great-great-grandparents. Over the years, the land was subdivided and then subdivided again among the siblings of each successive generation. 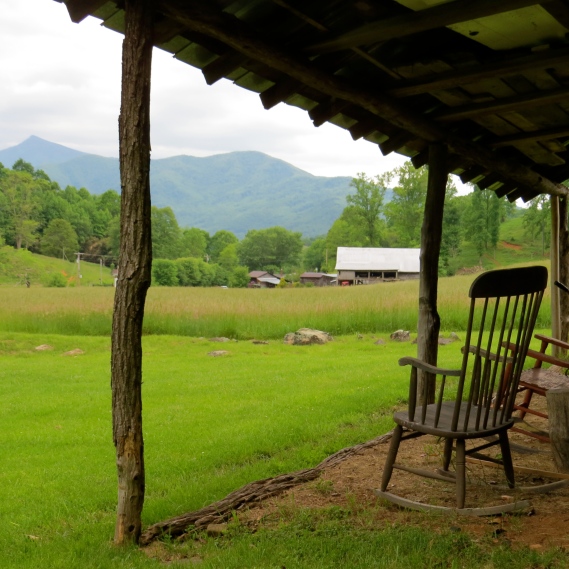 Family descendants still live in homes and on farms throughout the valley.

During the 45-minute drive up the mountains, I saw a few possibilities for the photographs I’d been after. But it wasn’t until we walked inside the family farmhouse

that I realized I had finally found exactly what I had been looking for.

Each room was decorated for the season and table was beautifully set with Tom mother’s Christmas china.

Mouth-watering smells filled the air and pretty soon, a feast of ham, garlic cheesy grits, sweet potatoes, and oyster casserole was laid out before us. 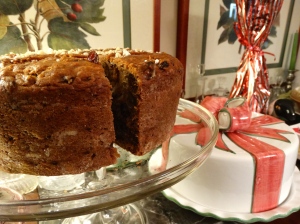 And for desert, there was a delicious homemade fruit cake (made with applesauce) – a recipe from Tom’s great grandmother.

Farm, family, food, and celebration – it was all right there.

And it had been all along.

Mix nuts, fruit, sugar and spices together in a large mixing bowl.  Stir melted butter into mixture, then flour and soda. Mix well. Pour into a well-greased and floured tube pan and bake in a 350 degree oven for one hour and 15 minutes (or until done.)