Many years ago, my back-then-husband sweetly pointed out to me that I could be rather bossy, almost always wanting to call the shots. Even though we were on the separation track, his words stayed with me longer than he did, haunting and taunting me with their accuracy.

And so, one Saturday morning, I decided to change.

The kids and I were heading out (as we often did Saturday mornings) to see what we could find at yard sales. (Being incredibly impoverished at the time, we got many of our clothes and household necessities on these weekend scavenger hunts.)

As we set off, I informed Zoë  (who was only six or seven at the time) –

that she was in charge of the day.

Delighted, she sat up tall in the front seat of the car as we drove and immediately came up with a plan.

“Ok, mama”, she said. “You follow your nose to the left and I’ll follow my nose to the right!”

(Hearing her words put a smile on my face and made the ceding of my dictatorial powers completely worth it.)

It didn’t take long for Zoë to zero in on a neighborhood yard sale a few miles away from our home. Looking up and down the street made up of sad older houses yet to be rescued by visionary hipsters, I was ready to get back into the car and leave.

Zoë, however, saw nothing but potential magic around us. “This one first!” she said pointing to what was quite possibly the worst of them all.

I started to object, but Zoë quickly reminded me who was the boss of the morning and dashed off to explore.

Waiting for her to reappear, I glanced somewhat disparagingly through the dismal mounds of old linens, flower pots, crock pots and yogurt makers.

And then something caught my eye —

My older sister, Karen, had carefully amassed a beautiful collection of early 1900s Royal Doulton during the years she lived and worked in England. She’d taken me to a few auctions and antique shows and taught me how to spot the glazings and markings she was interested in. It was a little unusual to find in the US, but there it was, this beautiful little vase, its royalty shining through from the jumble of its humble surroundings.

With shaking fingers, I picked it up to further examine it. The glazing and markings were correct. And surprisingly, it was in pristine condition. It was also the only thing in the pile that didn’t have a price on it. My guess was that it might be worth a couple hundred dollars.

I beckoned to a young woman who seemed to belong to the house and asked her what she wanted for it.

“Oh, that old thing?” she said, laughing. “How about fifty cents?”

I nearly dropped it.

Zoë reappeared at that moment, happily clutching a box of colorful glass beads from Germany that she’d found. 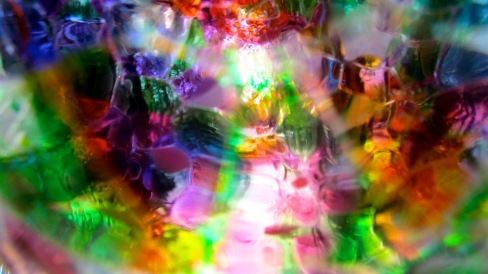 “Can I get this?” she asked. It was priced a few dollars more than the vase.

Still in shock, I nodded, and gave the woman five dollars for both.

All the way back to the car, I was sure the vase would slip from my fingers as karmic punishment for not revealing its worth to the seller. But I also couldn’t wait to tell my sister about my find.

As I was driving home, it occurred to me how absolutely weird it was to have been so quickly rewarded (so it seemed to me) for having given control of the day’s decision-making over to someone else – in this case, the excited child happily playing with her new bead collection in the back seat of the car.

Which brings me back to the story of that first weekend in Asheville and the serendipity that seemed to be following us around as my mother and I adventured through the little mountain town that my sister had wanted to move to.

I had originally intended to visit Asheville a few months earlier after dropping off the now 18-year-old Zoë for her university orientation in Wilmington, North Carolina.

But the owner of the bed & breakfast where we stayed in Wilmington (on the other side of the state, six hours away from Asheville) told me the roads to Asheville were closed due to flood waters from Hurricane Frances. Her husband, as it happened, was actually headed there to help out with the emergency clean-up. (Yet another connection in the come-to-Asheville vortex, I found myself thinking.)  Once the roads were opened back up and I was able to get in, she suggested I stay at the 1900 Inn on Montford Avenue, a bed & breakfast owned by friends of theirs. 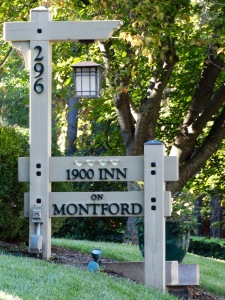 Having no other plan – and still mindful of the potential magic of the suggestions of others as a result of that many-years-ago yard sale experience – I took her suggestion and booked a room for a weekend with my mother later that fall.

The b&b was located in historic Montford, a mostly residential neighborhood on the north side of Asheville filled with interesting homes built between 1890 and 1920 by the town’s businessmen, lawyers, doctors and architects – several of whom continue to live on in the pages of Thomas Wolfe’s autobiographical, Look Homeward, Angel. Montford’s jumble of architectural styles includes Victorian, Queen Anne, Arts & Crafts, Neoclassical, Colonial Revival –

with a few small castles thrown into the mix.

Walking through the living rooms of the 1900 Inn, Mom and I were both struck by how very English it felt, which surprised us, given its location in the Southern Highlands of Appalachia….

As luck would have it, we had checked in just in time to enjoy a glass of wine and music by a local musician on the Inn’s spacious and lovely front porch. Delighted, we took seats at opposite ends of the porch and mingled with the other guests. 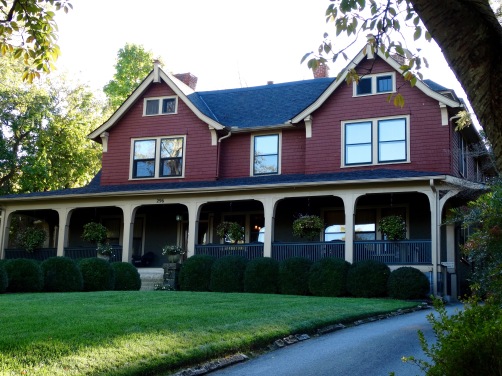 After some moments of polite stranger chat, I heard a small shriek from my mother’s end of the porch.

After only one glass of wine? I thought as I made my way over to her.

“You won’t believe this!” she exclaimed.

It turned out the reason for the English feel to the b&b came from the years innkeepers Ron and Lynn had lived In England back in the 60s and 70s – years that coincidentally overlapped some of the years we had lived there. Two of my parents’ long time friends were also friends of theirs.

I mean, really – what were the odds of this happening in a small mountain town in western North Carolina?

Equally amazed by the small worldliness of it all, Ron and Lynn suggested we continue talking over dinner at “Pyper’s Place,” a funky & delightful cafe and music venue just down the street co-owned by Peggy Seeger, folksinger and sister of the more famous Pete. 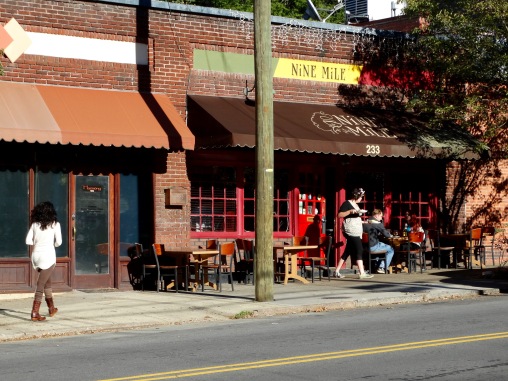 Somewhere in the future, it would become a Caribbean inspired restaurant, “Nine Mile.” But that night it was still Pyper’s and we had a delightful time there swapping tales and memories of mutual friends.

The roadblocks and detours over the previous months had actually put us on a path that brought us to an unexpected and special evening that could so easily not have happened at all. And yet somehow it all came together. Pyper’s Place closed their doors the following day, making me wonder if it had even existed at all, or had I just imagined it.

Asheville felt like home before we even moved there.

2 thoughts on “The Serendipitous Tale of “Why Asheville?” continues…”