I was standing on the very edge of terra firma in Denmark, looking across a dark sea of chilly water towards a distant Sweden.

Dawn was breaking and I was stark naked.

Why I was standing there, ready to jump into the cold water, can be blamed upon something I experienced on a winter’s night in Appalachia.

To explain how this bizarre moment came about, I will first explain the circumstances that led me to take off all my clothes in public in a foreign land – not normally a habit of mine. (Except for that time in Finland.)

When I moved to the mountains, I was an uptight, stressed-out mess. Years of single parenting, a year of intense care-giving for my father, the death of my unique and wonderful artist sister, the incessant struggles of being self-employed in the documentary film business had all taken a toll on my equilibrium.

Like a team of persistent and pernicious sculptors, these challenges had etched themselves into lines on my face and on my psyche, chipping away pieces of my potentially happier self.

Each was demanding and tough in their own way, but even worse was just the grinding competitiveness of daily life in a big city. And the fears. Two decades of the fear that I wouldn’t be able to take care of my kids, that I wouldn’t be able to pay the rent or the mortgage or any of the bills, fear that I would die in a plane accident (or a car accident), that my kids would be shot at school, be injured playing sports, crash while learning to drive, fear that I would get cancer like my sister, fear that I was eating the wrong things, cooking with the wrong pans, etc. Scared that someone would steal the idea for the book I had spent more than a couple of years researching and writing (yes, that actually happened.) Most of all, scared that I was too jaded or miserable to attract true love into my life. I let these fears eat away at my potential for well being and happiness like acid rain.

As soon as I could, I escaped to the mountains, relying only on blind instinct that this would be a place to heal and renew.

The mountains surrounding Asheville are, after all, some of the world’s oldest – so they know something about resilience and survival.

I only knew I needed peace and quiet, and their healing energy. 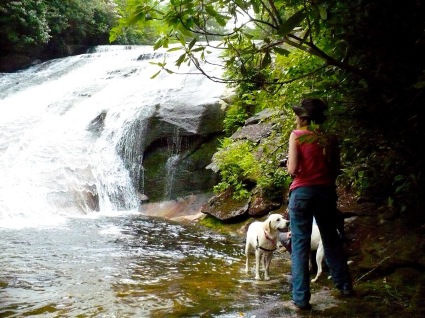 Although I had often gone to various churches (more off than on) much of my life, I made a conscious decision that would not be a part of my new life in Asheville. But then a chance encounter with six words took place in (of all places) a church, on (of all times) Christmas Eve. The irony of this was not lost on me.

‘Twas the night before Christmas, and my son, my former husband (who also moved to Asheville), his girlfriend, Nan, and I had gathered together at my new little home on the mountainside overlooking a bird sanctuary for a festive holiday meal and an exchange of gifts.

It was later in the evening when I heard Nan say she wanted to go to a service that night at Jubilee church. Steve (my former, her current) didn’t appear to be interested in going. Tipsy on the spirit of Christmas and goodwill toward all mankind, I heard myself say that I would take her.

What on earth did you just say?! my startled inner self exclaimed. It’s dark and cold out there! Wouldn’t you rather stay home, drink wine, fall asleep by the fireplace? Yes, dammit!

But it was too late. As Nan’s face lit up with gratitude, I realized I was committed.

And so, within half an hour, there I was, reluctantly sitting in a circle, inside a church, along with dozens of others bundled up against the chill, trying my best to tune out the words of Howard Hanger, the charismatic minister of the Asheville Jubilee experience.

He was going through the Christmas story and I’d heard it all before. Many times before. So instead, I turned my thoughts to what people were wearing and might there possibly be any handsome single men there.

Thus occupied, I didn’t hear any of the sermon until, about 2o minutes into the service, clear as a bell, in the midst of the random muck of my mind, I heard these words:

What if you were not afraid?

Howard Hanger had just gotten to the bit about the angels appearing and startling the shepherds.

Hah, that’s crazy, I thought. I can’t imagine not being afraid.

Think about it, Howard said, pausing to look intently at each person in the large circle around him, including me.

It would be quite amazing and glorious, I realized.

So captivating was this thought that I then missed the rest of his sermon, completely wrapped up in those six words, and a different vision of my life from what I had been used to.

And that was why and how – nine months after this Appalachian experience – I found myself standing naked to the world as dawn was breaking on the shores of Denmark, ready to jump in some chilly, chilly Scandinavian waters.

Be not afraid, I whispered to myself.

5 thoughts on “Naked in Denmark (or, How a Winter Night in Appalachia Inspired Me to Live Fearlessly)”