Appalachia can be a magical place – often when you least expect it. For example, a few months ago, while hiking in the Smokies, Tom and I unexpectedly stumbled upon a collection of woodland trolls.

But on today’s hike – roughly 1969 miles south of Katahdin, Maine – the magical encounter was with a burly hiker with the unlikely name of “Cupcake.”

Does this man look like a cupcake to you?

No matter. Experienced AT thru-hiker and blogger Evans Prater explains that trail names often describe a quirk, habit, or funny mishap a hiker has endured. These nicknames add to the sense of uniqueness of each hiker – to the sense of escape, personal discovery and soul-searching each individual is on the Trail to experience. Hikers are are given the freedom of a new life and a new identity by the simple act of changing their names.

In the wisdom of Eckhart Tolle, there is a split second when you first look at something, a moment when all you experience is the form the universe has created. And it is in this gap of thought that the key to presence, awareness, and peace exists – an acceptance of the universe just as it actually is – nameless, formless.

And so it was with “Cupcake.” I did not ask him how he got his name or who gave it to him. It didn’t matter.

I was more interested in the stories in his trail weary skin – especially the fantastic, colorful creature crawling up his leg, baring its sharp fangs at me.

“I’m a quarter Japanese,” replied the burly, red-haired, Scottish, lumberjack-looking dude matter-of-factly, as if I was unable to tell from his appearance.

Research later revealed that Kirin is the Japanese form of the Chinese “qilin.” The kirin is often depicted as a dragon shaped like a deer with an ox’s tail instead of the tail of a lion. It is also often portrayed as partially unicorn-like in appearance, but with a backwards curving horn.

In the Chinese hierarchy of mythological animals, the qilin is ranked as the third most powerful creature (after the dragon and phoenix), but in Japan, the kirin occupies the top spot.

Kirins are said to appear with the imminent arrival or passing of a sage or illustrious ruler. They are usually depicted with raised forelegs, flames around their bodies and wings to help them fly across the sky – all of which may help inspire weary hikers on a 2,190 mile trek.

They are extremely gentle creatures and never step on grass and insects as they move around – very much in keeping with the philosophy of nature-respecting, long distance hikers.

A Kirin is also a good omen – thought to occasion prosperity or serenity. They appear when all is right with the world.

And so it was this afternoon, as we briefly crossed paths on the Appalachian Trail and compared body art – one, a day-hiker with flowers inked on her leg; the other, a thru-hiker committed to months on the AT with a Japanese dragon on his.

A brief exchange stories, the sighting of a magical creature, hours spent in fresh air and the ancient beauty of the Smokies.

Moments when all was right with the world. 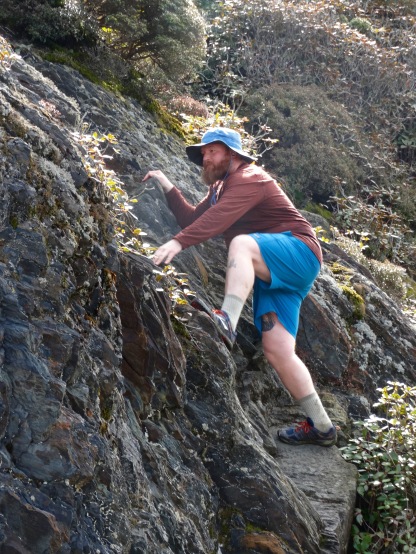 … and whatever lies beyond.