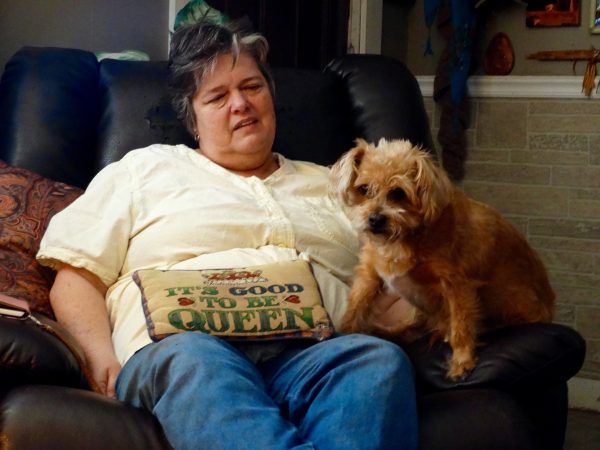 October 2016 … My daughter Zoë is visiting me in Asheville, so it occurred to me this might be a good time to take her to see Angela, “the Hillbilly Psychic.”

Ten years have passed since I first made the drive to the small town of Marion, which lies in the shadows of the Blue Ridge Mountains, for a consultation with Angela.

Back then, Angela was living in a trailer. There was a peaceful water fountain in the room where she received visitors which helped calm the atmosphere. But the visit, with its repeated emergency phone interruptions, was anything but peaceful.

Most of what Angela told me didn’t resonate at the time (or even later) – with the exception of one comment. And the perspective-changing accuracy of that one thing was enough to make me curious to see her again – and this time, bring Zoë with me.

Things have changed over the past ten years. Angela now lives in a cute little house on the outskirts of the downtown historic area. Inside the Angela’s new (old) house, there is a wonder of treasures from different parts of the world. Elephants and giraffes cavort around the fireplace. A world map, a spinning globe and a cuckoo clock add to the international affect. Business must be good.

Angela doesn’t talk much about her past but, this being Appalachia, the walls up offer a few clues… 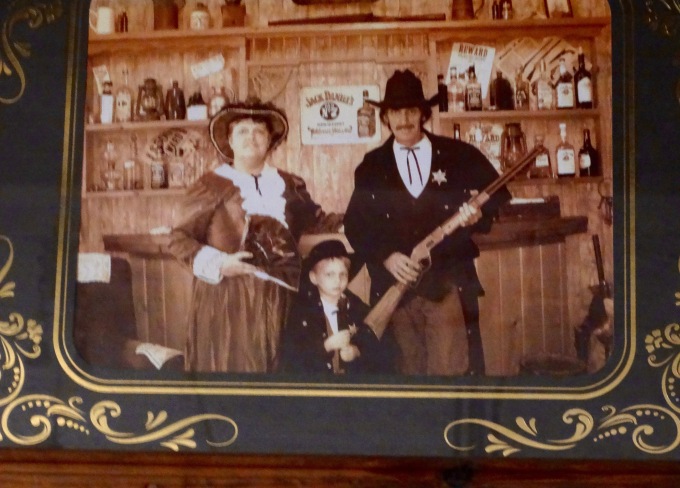 For a time, Angela was a regular on WNCW, the NPR radio station licensed to a nearby community college. She’s also appeared in a film or two, including the horror, sci-fi thriller, “Alien Abduction.”

Dodging her small but surly guard dog, Martin, Zoë and I settle ourselves on a comfortable couch while Angela fusses over a newly purchased freezer she’s concerned isn’t performing right. (She was preoccupied with a missing child the last time I saw her.)

Eventually she settles down and focuses on us.

“What’s your birthday?” she asks Zoë. She appears to be lost in thought for a moment after Zoë tells her.

“Okay, if I tell you something that doesn’t make sense, just wait, because it will. And if you have questions, ferGodssake, just ask me!”

Getting into her zone, Angela says Zoë looks and feels young, but she’s actually an onion – someone with many layers. She has the vibe of someone from LA or New York City, someone who mingles with the rich & famous.

[Zoë actually works for a small tugboat engine repair shop and a craft brewery in Seattle.]

“Wait, that’s interesting,” Angela says suddenly. “Is it okay if I get weird today?” 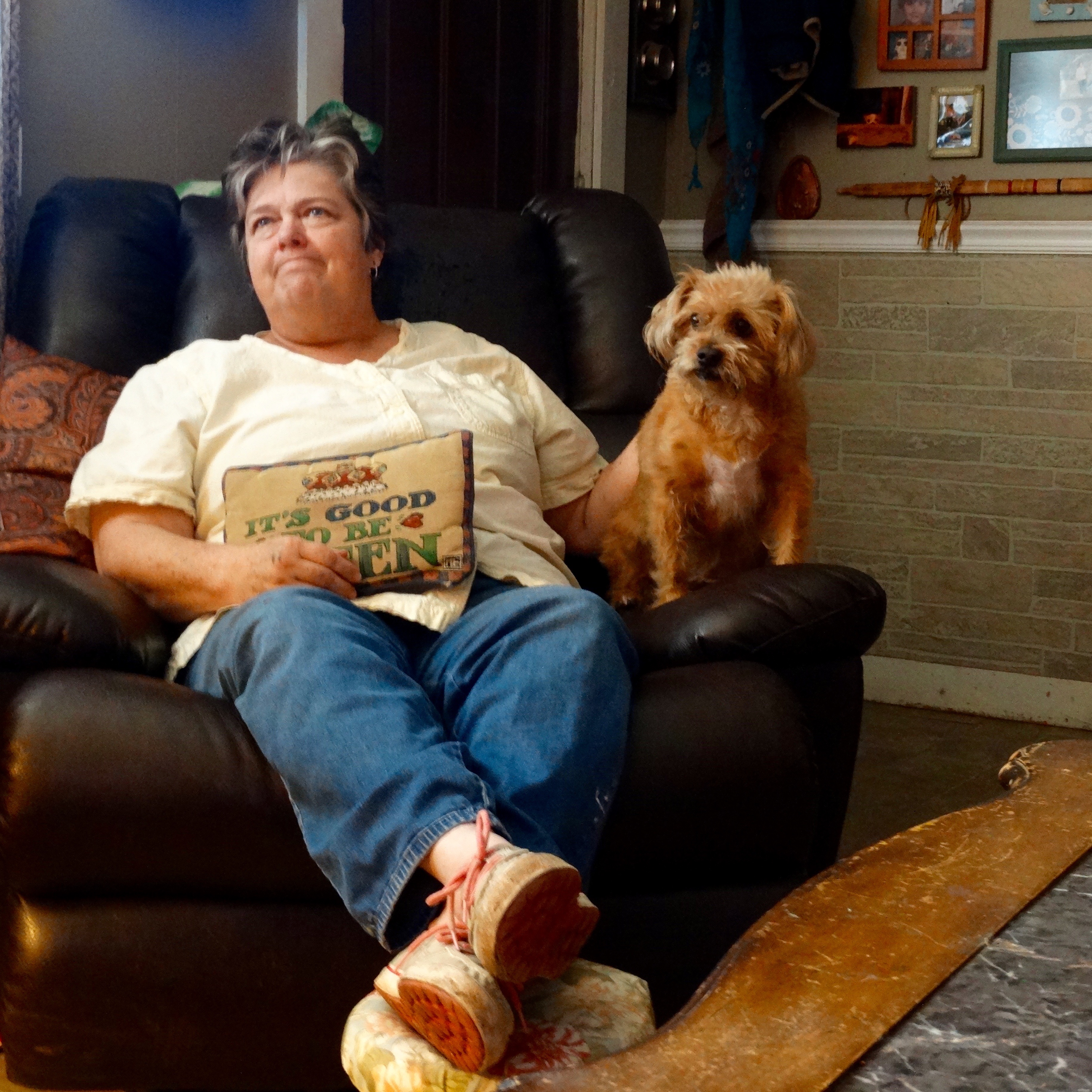 “You feel like the kind of people who do something creative, who bring beauty into the world,” Angela declares. “Your totem animal is a chameleon.”

“You become what you need to be,” she continues, “but the truth is behind your eyes. You hide in the light. And anytime you see a chameleon, you will know that is where you need to be.”

I like these words and think this sounds rather on target. I glance over at Zoë who is smiling politely, not wanting to give Angela clues nor encouragement. Angela’s other dog, Roger, snoozes on her lap.

“You have a ‘moving’ vibe about you,” Angela continues, zeroing in on my daughter’s peripatetic ways.

Zoë and I freeze.

Of all the names in all the psychic parlors in the world, she happens to come up with the exact name of someone Zoë recently met.

But Angela doesn’t offer up any further insight.

“You have a travel vibe,” she continues, still addressing Zoë. “You’re on the threshold of a brand new life. Keep a vision of what you hope for. Money is somewhat of an issue – it’s always feast or famine for you – but it will be more stable, and feastie, over time.”

Turning her attention to me, she asks my birthday.

By now, Martin-the-guard-dog, somewhat calmed, has draped himself protectively over Angela’s leg.

Looking at the two of us, Angela declares there is an elastic – meaning able to stretch great distances – bond between us.

That is true. Zoë and I have often been in different countries or on opposite sides of the US, but always close.

“You have a tough vibe,” she says, looking back at me.

While not surprised to hear this, I would certainly rather be emoting a travel or creativity vibe.

“Yup,” she continues cheerfully, “I’m sorry to say this, but you’d be the last one I’d eat,  you know, if I was on a desert island and had to eat someone, because you’d be all sinewy.”

Even by hillbilly standards, that’s pretty weird, I thought.

She sees my expression and quickly assures me, “You feel a little beat up to me, but you have a real good core.”

After another moment, she continues.

“There’s a male spirit who has passed over, who’s watching over you. You’re getting a lot of help from the other side. I also feel a woman, I think it’s a grandmother,” she says.

My thoughts immediately turn to the presence I feel while I’m working on a book I’m writing about, yes, my grandmother.

“But you need more sleep!” she says to me. “And more order in your life! You have tension in the back of your neck and upper shoulders. You need to go to the ocean, or somewhere near water – it’ll be good for your spirit.”

An invitation to a wedding on the Greek Riviera will arrive shortly after this visit.

“You have psychic dreams,” she says after another pause.

Now she has my interest, I’m liking the sound of this.

“You are starting another cycle … This is the year to resolve conflicts over money or work, get it sorted out. I don’t know for sure, but I feel that’s what I’m supposed to say,” she states defiantly. “And I’m not taking it back.”

“You’re in a relationship,” she says, looking at me. “Are you married?”

“I am in a relationship,” I respond, “but we’re not married.”

In order not to give clues, I’m not wearing the ring Tom gave me. Instead, Zoë has it on her finger.

“It feels like you are,” Angela replies, tartly. She asks for Tom’s first name and birthday.

I tell her and she ponders the ceiling for a moment, then tells me a few things about Tom, mentioning that we are in a ‘bubble’ – eerily using the exact same word I had just used to describe our relationship to Zoë that very morning.

She describes certain characteristics of Tom’s, all of which are surprisingly accurate. She say she feels his mother very strongly.

Ten days later, Tom’s mother will be hospitalized unexpectedly for an irregular heartbeat.

I ask her again about the psychic dreams.

“Pay attention to the images that come to you first thing in the morning,” she advises.

Does she know I keep a journal by the side of my bed with the word, “dormiveglia” – Italian for “waking dreams” – written on it?

“Pay attention,” she repeats, “because you’re so busy other times, so this is when it comes through. Pay attention! The more you pay attention, the more it grows.”

“And you!” she says, turning her attention back to Zoë, “You are highly empathetic. You have to shake off the emotions of others.”

Then she says,”I feel a wedding!”

Zoë starts to shake her head, but I say, wait a minute – what just happened last night?

“Oh right,” Zoë says. “A friend asked me to be her bridesmaid last night.”

Zoë plays with the sleeping dog in her lap. Just another lucky guess, she says afterwards.

“You’ll know someone else long before they know you,” Angela says. “Continue on with what you do for the bread & butter, but I expect a creative vibe to burst through at some point. It feels like you’re not done yet with that.”

Zoë was a film studies major.

The Hillbilly’s Psychic’s last words to us are that I feel very “Asheville-like” to her (whatever that means in her mind.) And Zoë is still the chameleon – trying to pass as uncomplicated, but not.

Angela doesn’t name a fee, but donations are accepted. Ten years ago, she immediately stuffed the cash I gave her down into her bra, into ‘the bank of Angela’ she said, laughing.

These days, Angela uses someone else to take the money for her.

When I offer payment, she gestures to a statue of a turbaned Indian holding a small tray next to her wide screen television.

“I had an Indian fellow in here not too long ago, and I worried he might take offense,” she says, laughing. “But he didn’t.” 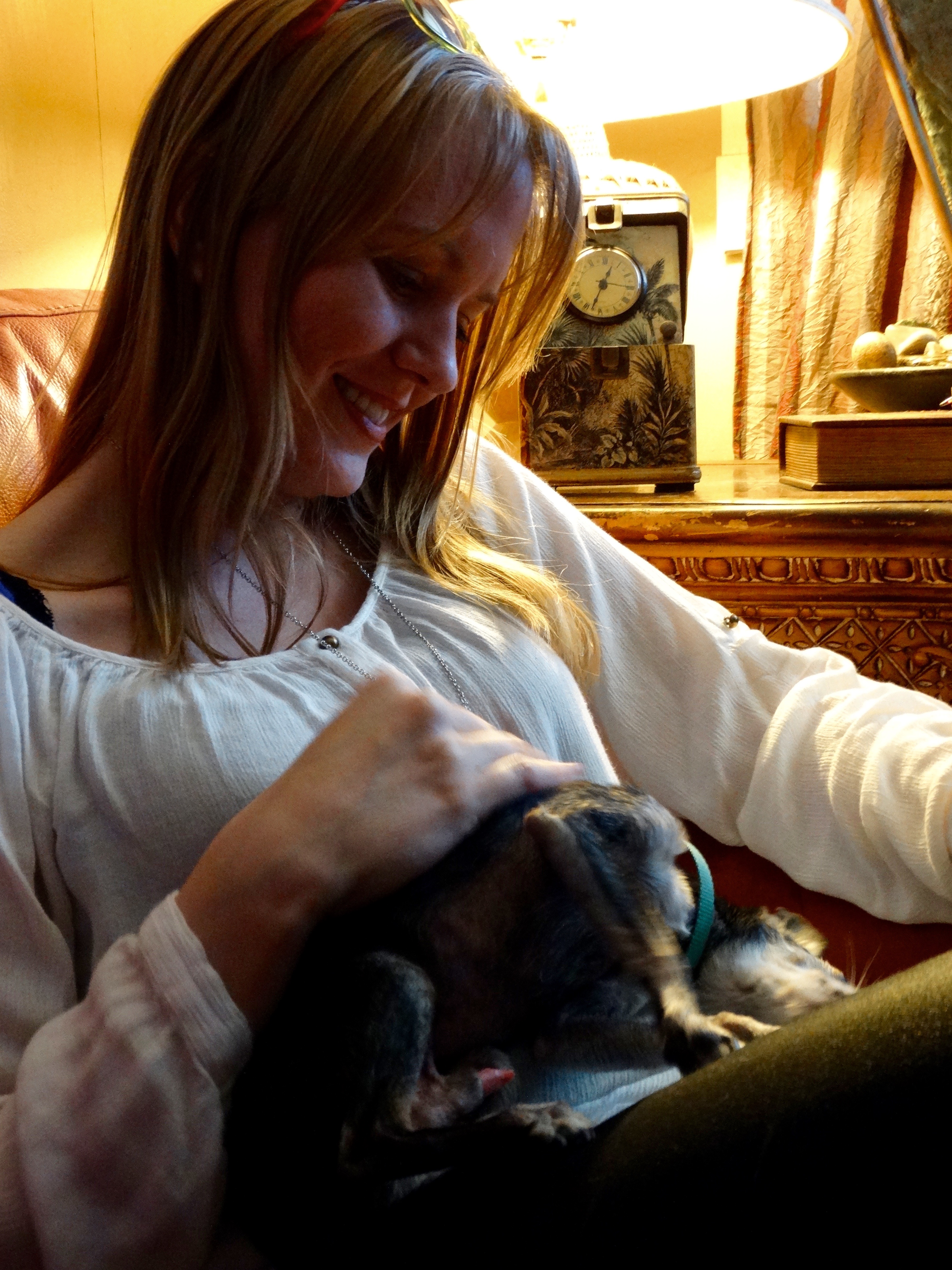 Angela the Hillbilly psychic was right about both the wedding & the name. Zoë met the love of her life, a guy named Brian, just a few months after our visit to Angela. They’re getting married in two weeks.