The door opened slowly to reveal a frowning man, perhaps in his early 40s. He wore a dark t-shirt and jeans. His build was slender, but muscular. He had dark hair, a neatly trimmed mustache and short beard. Tattoos covered his arms. The word “Gypsy” was inked in large flowing script across his throat.

Ahh, so many moments had led me to this one.

The images occupied my thoughts, teasing my imagination.

At night I dreamed about it.

I became a stalker. Every drive into town was detoured to take me past this place I hadn’t even realized existed only a week earlier.

And now I was standing on the front porch of the house of my dreams. And I wanted it.

But the brokers of house dreams had told me I couldn’t buy this one until my own little house on the hillside was sold. Unfortunately, my house wasn’t on the market. It wasn’t even ready to be on the market.

I knew I couldn’t wait that long. I did not want someone else to get the house I felt so irrationally drawn to. Not knowing what to do, I began stalking the house to see if anyone else was hanging around it, possibly interested….  I thought of little else.

And then one morning at the yoga studio, while I was lying on my mat in semi-delirious savasana after ninety minutes of hot poses, a simple thought penetrated the haze in my mind: Why not just knock on the door and tell the owner I want to buy his house?

Under the circumstances, it seemed an entirely reasonable thought.

Still in a post-yogic trance, I drove directly to the house from the studio without stopping to change out of my sweaty yoga clothes or tidy my appearance. I must have looked a mess.

Moments later, there I was, standing on the magical porch of the house of my dreams. I raised my hand and knocked on the black front door.

There was the sound of footsteps and then the door opened. The frowning and tattooed “Gypsy” stood before me.

I thought I heard a slight accent, but couldn’t identify it.

His dark eyes regarded me without expression for a very long moment.

And then, “Would you like to come in?” he asked, opening the door a bit wider.

“Thank you, I would,” I replied, and stepped inside, leaving the sunshine behind me.

Strolling in my neighborhood with my own dogs, I turned my head just in time to see two snarling beasts hurling themselves at us from over a stone wall.  And then they were upon us, growling, gnashing, biting.

My Golden Doodle tried to hide all 95 pounds of her frantic self between my legs, but my little guy – a Schnoodle named Bandit – was at jaw level and took the brunt of this unexpected attack. Someone later told me he could hear Bandit’s scream a block away.

A few minutes-that-seemed-like-hours later, the owner was able to get her vicious beasts under control. Shaken, but mostly okay (so I thought), we straggled back home to assess the damages.

Klejne, the Golden Doodle, seemed to have escaped damage, but there was  a bloody gash in the grey fur on Bandit’s backside – scary, but not enough to warrant the expense of a weekend vet visit – I hoped.

Once home, Bandit crept into a dark corner and refused to come out the rest of the day. 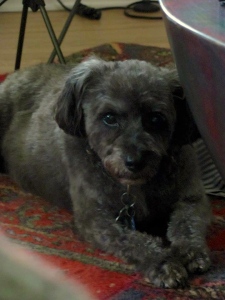 Not even for meals.

Yes, even in Asheville, bad things can and do happen. The interesting thing, however, is to pay attention to what happens in the wake of bad experiences.

Unexpectedly, the first stitch toward mending the upsetting rent in the fabric of the day came in the form of another dog –

– a 180 lb Mastiff named Cupcake, who, when I happened to pass her by later that afternoon on my way to the market, was snoozing peacefully in the sun.

Surprised by the ribbons, I leaned over the fence to ask Cupcake’s owner, Meg – a neighbor I barely knew, for permission to take a few photographs.

Cupcake just got back from the groomer, Meg said, by way of explanation for the ribbons. And so began an entirely pleasant conversation that ended with an invitation from my new friend to stop back by that evening for a house party. A popular local band – the amazing Sirius.B – musicians who describe themselves as Absurdist Gypsy Folk Funk Punk –

would be playing, in her house – walking distance from my own!

Curious to know what Absurdist Gypsy Folk Funk Punk sounded like, I returned later, along with a number of other neighbors.

The day had already improved immeasurably, but concerns over little Bandit still hovered in my mind.

I still wasn’t sure whether or not his wound needed professional attention. Between songs, I sought out advice from other dog-owning neighbors.

Meanwhile, the strains of Absurdist Gypsy Folk Funk Punk – like musical incense – were floating out beyond Meg’s house, up the block, and over to another street, reaching into the ears of a young nurse sitting on her front porch six or seven houses away – a nurse who just happened to be a big fan of the band. 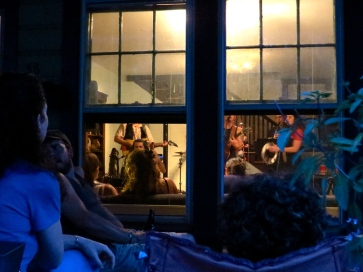 Hearing what she knew right away was the music of Sirius.B, she wandered over to join the little throng enjoying the music inside and outside the house of Cupcake. 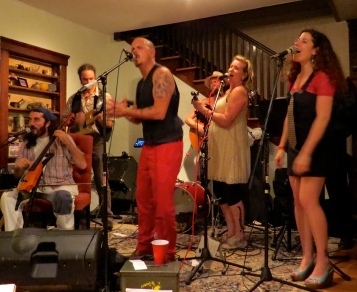 When I discovered she was an emergency room nurse, I told her about Bandit’s misfortune. Should I take him to the weekend vet clinic? I asked. By then it was quite late in the evening.

“Let me take a look,” she offered.

Two other neighbors, having heard the story, tagged along on our short walk back to my place, stopping along the way at the nurse’s house for emergency medical supplies. 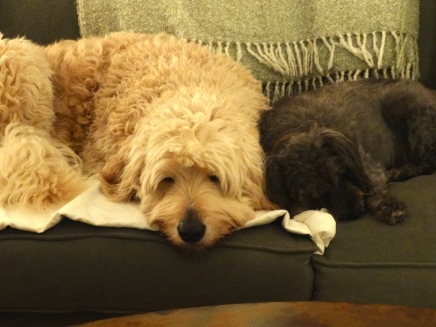 And that is how, a short while later, the four of us came to be performing spontaneous Schnoodle triage on my sofa by the spotlight of a handheld iPhone.

This compassionate care by three people who only hours earlier had been complete strangers to me, resulted in a happy and mended little Bandit.

After they left, I watched him snoozing peacefully, thinking of the day’s unexpected kindnesses – the invitation to a house party with great music, meeting new friends and neighbors, the midnight nursing to fix him up – 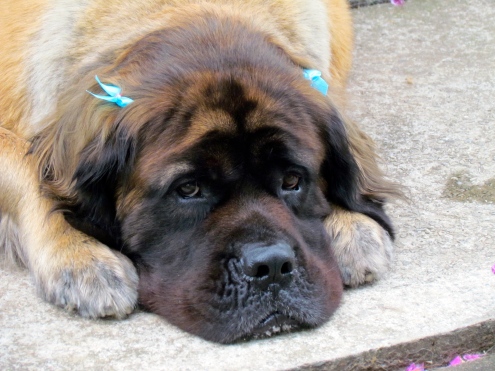 none of which would have happened but for the luck of encountering a giant Cupcake with little blue ribbons on her ears.