‘Twas the week before Christmas, and all through the movie house, not a creature was stirring, not even a mouse.

That’s because my son and I, along with dozens of other movie-goers, were sitting in stunned silence watching “127 Hours.”

This took place back in 2010, but Christmas still brings back memories of Danny Boyle’s film for me.

Given that we live in the mountains, and often go hiking, I thought I’d use “127 Hours” to drive home a lesson to my twenty-year-old son – 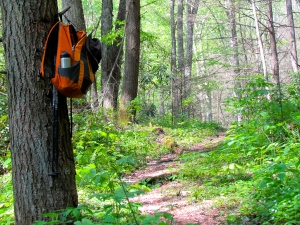 Or, if you do, to at least take the time to file a flight plan with someone – anyone – regarding your anticipated whereabouts.

Based on canyoneer Aron Ralston’s memoir, “Between a Rock and a Hard Place,” it’s a biographical, survival drama about five days in the life of a young man whose arm has been pinned between boulders after a fall. James Franco portrays Ralston, making video logs of his ordeal and wrestling with the excruciating decision either to die alone, or cut off his own arm in order to free himself. 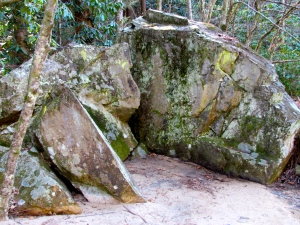 I was fairly certain it might teach both of us an important lesson.

Leif loved how the film portrayed Ralston’s interior mental and emotional journey.  On the way home, he appeared to be lost in thought, as I yattered away about safety issues.

I slept peacefully that night, happy my point had been made.  Another item off the list of the potential perils of living in the Appalachia mountains, I thought.

A few days later, Leif asked me to hang up my Christmas stocking. 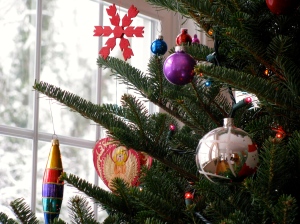 What for?  I asked, unable to remember the last time anything had been put into it.

Just do it, he advised.

We open our presents, in the Danish tradition, by candlelight on Christmas Eve.

Start with your stocking!  Leif said to me as soon as we gathered in the living room.

I took it down from the mantle and was surprised to feel several small packages inside.

Leif watched as, one by one, I opened them up. 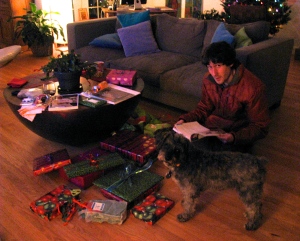 First, the ever-useful bear bell – a bright and cheery jingle to warn of your approach in the woods, hopefully scaring off any nearby bears before you actually see them.

Next, an emergency poncho, followed by a thermal blanket.

The forth little package turned out to be a magnesium fire-starter.

I was super impressed by his thoughtfulness, and started to tell him so.

I undid the wrapping.

Inside was a small commando saw, capable, I noticed, of cutting through bone.

“In case you’re ever stuck between rocks,” Leif said cheerfully.  “You’ll be able to saw your arm off!”