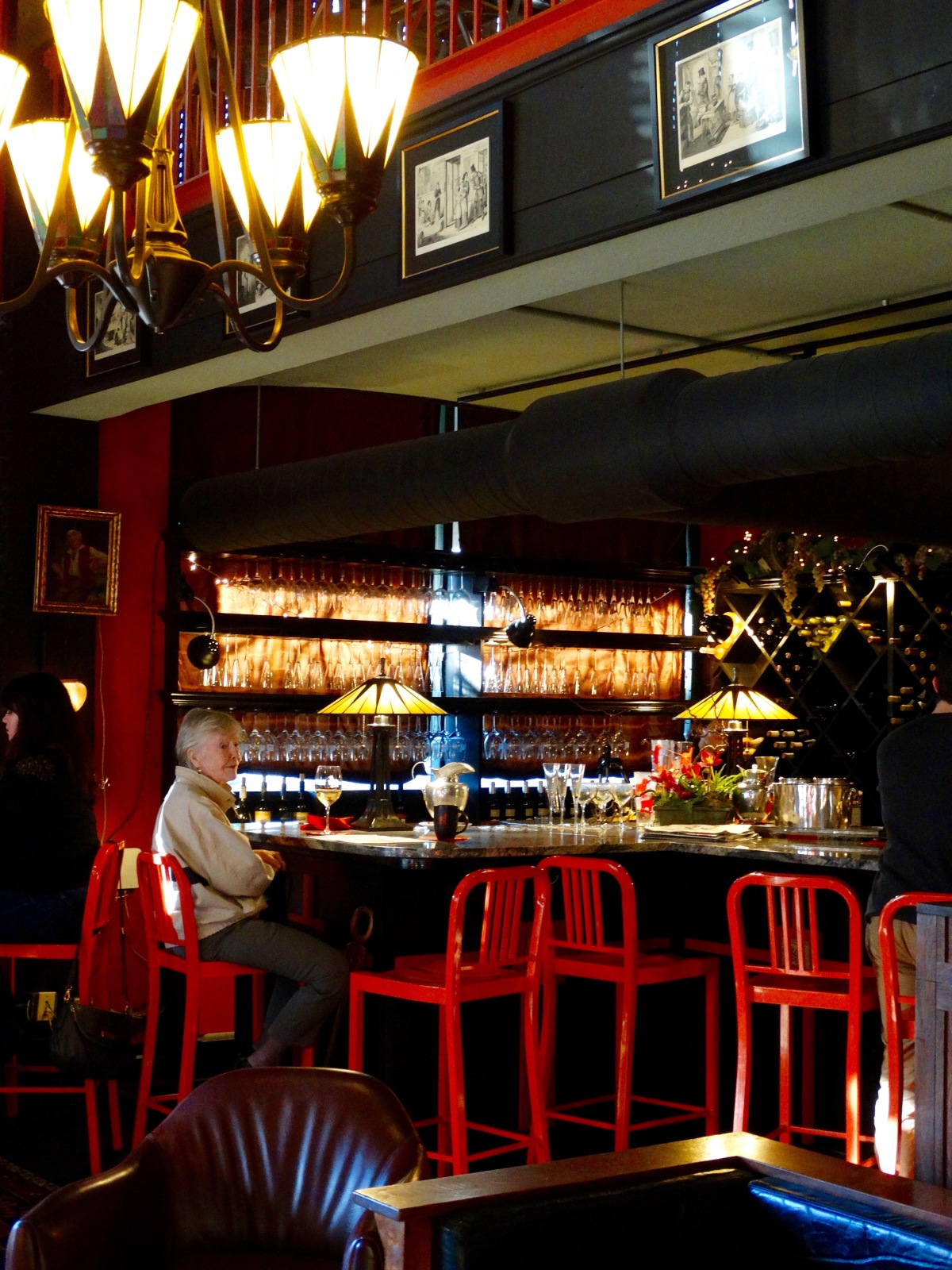 The journey through mind and memories continues….

Many weeks after my mother’s death, my heart holds a simmering stew of mixed emotions where moments of peaceful acceptance are spiced with shards of regret and seasoned with fragments of conversations that pop into my head, often when least expected.

My mother had her favorite places in Asheville – Malaprop’s Bookstore and 5 Walnut Wine Bar among them. But I think her favorite of them all was Battery Park Book Exchange & Champagne Bar, pictured above.

There, over a glass of wine and a cheeseboard,

she and I would have long discussions about the affairs of the world, my kids, and good adventures from days gone by. Although her short term memory was terrible! – as she often exclaimed in frustration – she was clear and sharp in her stories from decades past of her travels and the places we’d lived. We could (and did) talk for hours.

This past year, however, she became a little reticent about leaving her little garden apartment, even to visit her favorite places.

When I suggested going into town together, an awkward look would pass over her face and she would say, somewhat apologetically, “How about if we just stay here?”

And so, every week I would join her in the dining room at her retirement village for lunch or dinner, and listen once again to the stories. Often we were there, still talking, after everyone else had left. She loved that.

“We have the best conversations!” she would exclaim when I eventually walked her back to her little flat – even if she had done most of the talking.

She’d call a few days later to thank me for coming over and tell me how much she’d enjoyed our visit, often ending with the same words, “We have the best conversations!”

Last February, I offered to take her out for a glass of wine in celebration of my sister’s life. She started automatically to demur, but when I suggested we go to Battery Park Book Exchange & Champagne Bar, she couldn’t resist. And so we celebrated Valentine’s Day and my sister there together in the usual way – a glass of wine, some cheese, and of course – stories. 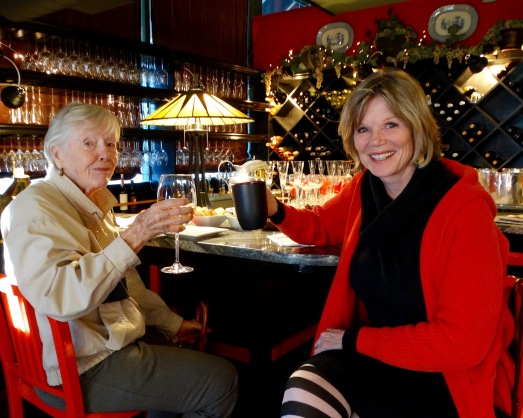 “We have the best conversations!” she remarked on the drive back to her place in Black Mountain.

It was to be her last visit to the Book Exchange & Champagne Bar. In the weeks that followed, she became increasingly reluctant to leave her little home.

She did admit, some weeks later, that she would love one more trip there. A mischievous little girl smile of hopefulness and delight lit up her face at the very thought of it.

But somehow I didn’t have the time, or make the time. I wasn’t sure she could manage it. Nevertheless, it still bothers me greatly that I didn’t somehow work it out for her.

Second guesses and regrets are part of the pain of dealing with death, but I’ve realized that trying to mentally outwit the sharper edges of remorse is often unproductive.

Rather, the best antidote to the relentless head-tricks and mind games we put ourselves through in the wake of loss might just be an unexpected little piece of magic.

And so it was the other night when a painting in a dark corner of the old Wedge building in the River Arts District caught my eye.

I was wandering around a friend’s studio during a reception showcasing her work that was intriguingly titled, “Accidentally On Purpose.”

Mixed media artist Jacqui Fehl is a tiny, magical creature with large grey eyes and long ropes of platinum & black dreads. She describes her paintings as “a blend of grunge, whimsy and outsider.”

Influenced by music, lyrics, feelings, and stories, Jacqui’s art is unpredictable – playful, colorful and humorous with an appealing edge of darkness. Jacqui says her creative process is mostly intuitive; she may start out with an idea, but never really knows what the end result will be.

I’ve been a fan of her work for years.

“It is a dance of layering on, removing, covering up and revealing. I like my work to be loose, a bit flawed and not too precise or perfect.”

That sounds like my life, I thought, as I read her artist statement.

Even in the shadows, and even though it was not part of the show, I could see and feel there was something about this particular painting that was very compelling. The colors, the mood of it – it had a storytelling aura and lovely intimacy about it.

Another artist in the gallery caught me staring at it.

“Yes, I do,” I replied, unable, for some reason, to take my eyes off it. I was curious about – and drawn to – the random appearance of chairs throughout it. 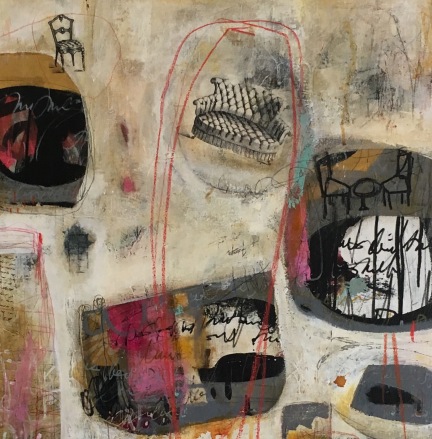 Knowing that Jacqui always gives her paintings interesting titles, I asked her if she knew what Jacqui called it.

She picked it up from the easel and in the low light of dark corner, squinted at the writing on the back of it

“The Best Conversations,” she said.

I stood there, speechless. And so she said it again, a little louder this time.

A little magic, a little serendipity … remembering the many times my mother had said those exact words. My head flooded with delight – and relief. Finding this painting felt like forgiveness.

Jacqui Fehl’s delightful painting came home with me that night.

– just one of the many places where my mother and I often had ‘the best conversations.’