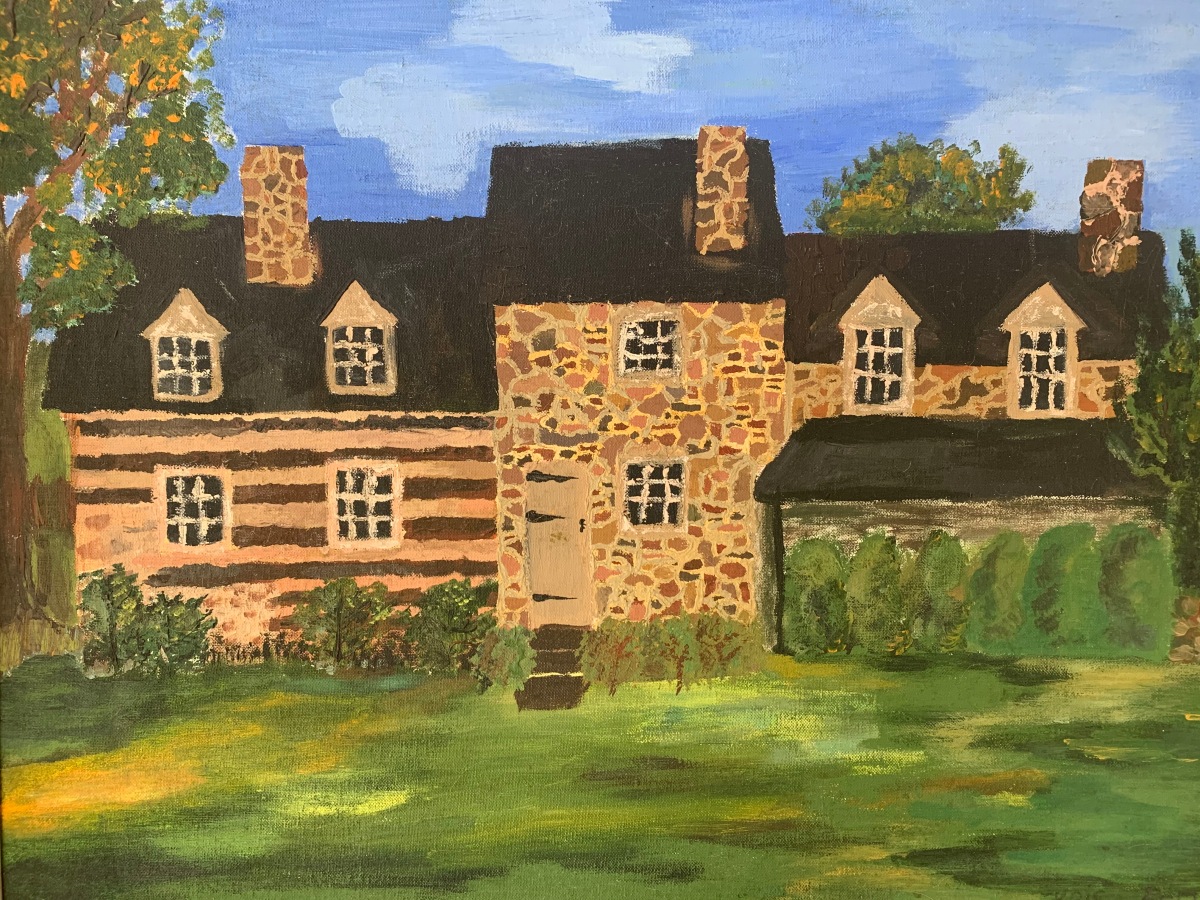 I was awakened yesterday morning – on my birthday – by a growing awareness of another presence quite close to me, hot breath on my cheek.

I opened my eyes slowly to see a rather large golden muzzle and a pair of big brown eyes staring intently at me from their resting place at the edge of the bed.

This vision unexpectedly brought up a hazy but happy image of my big sister doing the exact same thing to me, long ago and far away, when I was a young teenager and she, a university student in her early twenties, was visiting from New York City. Something I hadn’t thought of for years. I laughed out loud at the memory.

In those days, my parents and I lived in an historic 1880s home many miles outside of Philadelphia. It was an interesting old house, one with a nearly impossible amount of character. Over the many decades of its existence, various homeowners had added several stone additions to the original log cabin, each with its own personality traits.

The resulting jumble sat on two acres, surrounded by big old climbing trees. There was even a magical wishing well on the back stone terrace, surrounded by shady gardens.

Behind the house, there was a wooden carriage house of uncertain vintage, large enough to accommodate three vehicles, with tall wooden doors that swung wide open and needed to be anchored in place by sliding long metal rods down into rusted old metal holes in the ground.

On the backside of the carriage house, there were more gardens and an old stone stable with two stalls (for horses we didn’t have) and a hayloft, accessible only by a rickety pull-down ladder.

Even in the dead heat and stillness of long and lazy summer afternoons, I would climb up, throw open the large hayloft window and hang out either with one of my best friends or just by myself, reading or writing. It was my first studio, my first loft apartment.

Inside the log cabin portion of the main house, which my mother used as our dining room, there was a large hundred-plus year old stone fireplace with a cooking area on one side and an eating side on the other. The fireplace was so big that if you took care to stoop way down, you could actually walk right through it – providing there was no fire going. An enormous, black cast iron antique pot hung from a long iron arm anchored into the stone and could be swung in either direction across the fire, as needed, to increase or lower the heat on the contents.

The old wooden floors creaked a lot in this, the oldest part of the house. It took me awhile to learn which part of which steps to avoid if I wanted to creep up or down the back stairs, to or from my bedroom above, soundlessly.

And it was up there, under the eaves of the old log cabin portion of the house, in one of the twin beds, that my sister slept next to me when she came for a visit.

If she happened to wake up before me, which she usually did, she would get up quietly and kneel down on the old wooden floor next to my bed. Then, without touching me, she would stare at me fiercely until I startled awake from the sheer psychic pressure of her intense gaze. The moment she saw my eyes open in surprise, she would throw her head back and chortle with laughter, delighted at having awakened me by her sheer force of will.

This never, ever failed to amuse her.

Unnerving as it was for me, I liked that my big sister wanted me to be awake with her the moment she was up.

And all these years later, I love that Kiitos, my 8-month-old puppy, who has never done this before, woke me up in the same way on the morning of my birthday. It brought to the surface this long ago memory of a cherished sister who has not slept by my side for more than twenty years now.

It felt like she was here, with me, on my birthday – the first to greet me, the one to have, once again, stared me awake.

Best of all, she reached out to me through a dog. She loved her two dogs more than just about anything else in the world.